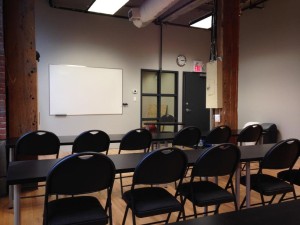 Lecture rooms are spacious, well-lit, and well-ventilated for a comfortable education experience.

PALS – short for Pediatric Advanced Life Support – is a program offered in all six of our training locations. It is a two-day program (like the other advanced CPR course, ACLS) and runs for a total of 14 class hours. There are several sessions in a day, but all the hours add up to 14. Several breaks are given to the student in between the sessions as well.

An accompanying program to PALS training is PALS re-certification. Because the PALS program is a certification program, our students are awarded with training certificates once they finish the course. However, the certificates have a validity period of 2 years, after which they have to be renewed. Re-certification is only offered to students who have near expiry certificates. If the credential has already expired, the student can no longer take re-certification (which only lasts 6 to 8 hours) and have to enroll in the PALS course again.

We have locations in Honolulu, Las Vegas, Los Angeles, Portland, San Francisco, and Seattle. All of the locations have the same programs and the same training fees. The schedules may vary among them but the quality of the training programs remain the same throughout.

You may visit each location’s webpage for more details on available classes, schedules, fees, and contact information.

Cardiac arrest is a condition where the heart stops beating completely. It is characterized by a lack of pulse, irregular breathing, an unresponsiveness to vigorous shaking and name-calling. CA can be caused by a number of factors. In adults, it is most commonly caused by a pre-existing heart problem – usually lifestyle related such as atherosclerosis. Children are quite another case. When children get heart attacks it is most commonly due to respiratory failure. Infants and toddlers are prone to respiratory problems which can deteriorate into respiratory failure. This places a great amount of stress to the heart which can cause it to stop beating (hence the term asphyxial arrest).

A few tips when giving CPR to pediatric victims: